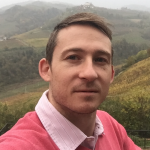 Andrew has been involved with wine in one way or another since leaving school 19 years ago, initially as a sales assistant at his local off-licence , then as a sommelier at a private club in London.  He trained to be a chef at Leith’s School of Food and Wine, winning their annual prize for wine, and completed his advanced certificate from the WSET.  In 2004 he worked at the cheesemongers Paxton and Whitfield, a London institution and purveyors to the Royal family, whilst finishing his WSET Diploma.

After this he took a job with renowned London merchant Berry Brothers & Rudd, before upping sticks and moving with his young family to Brazil.  While in Brazil he worked for a small wine merchant in his local town , helping grow the variety and quality of wines available to the continually expanding base of new consumers.  Returning to the UK in 2010 he decided to have a go at wine trading, finding out it wasn’t really for him; having tried and failed to get a ‘lowest bid’ wine auction site off the ground for an unhappy 11 month period he represented Acker Merrall & Condit in the UK, something he is a little embarrassed about.

Andrew returned to Brazil in 2013, this time principally as a wine consumer, and now concentrates his wine activities to collecting almost exclusively from well-known merchants in the UK, many of which he has had a relationship with for a decade or more, along with attending tastings and enjoying what the local wine scene has to offer.

Authenticity and provenance have always been of upmost importance when building his collection.  Hungry for more knowledge he attended our training levels I and II in San Francisco and looks forward to becoming our TCM trainee and eventually trained authenticator for Brazil and South America.

Away from wine he enjoys dealing with small scale property development and refurbishment, playing football and listening to classical music.  Andrew speaks fluent Portuguese and a little Spanish.