A Multi-Part Feature on the trial of Rudy Kurniawan, including the transcripts, testimony and evidence that put the largest wine counterfeiter of our time behind bars.

The Government called Christophe Roumier, winemaker of Domaine Georges Roumier, from Chambolle-Musigny in Burgundy.  Domaine Roumier was founded by Christophe Roumier’s grandfather George in 1924 when he married into the family that owned the estate.  M Roumier is the third generation, after his father and grandfather, to head the family winery.  The Domaine now mainly makes red wine from Pinot Noir, and one white, Corton-Charlemagne, from Chardonnay.  M Roumier confirmed that they make wine from Bonnes-Mares, and have done from the beginning of their domaine, in 1924. 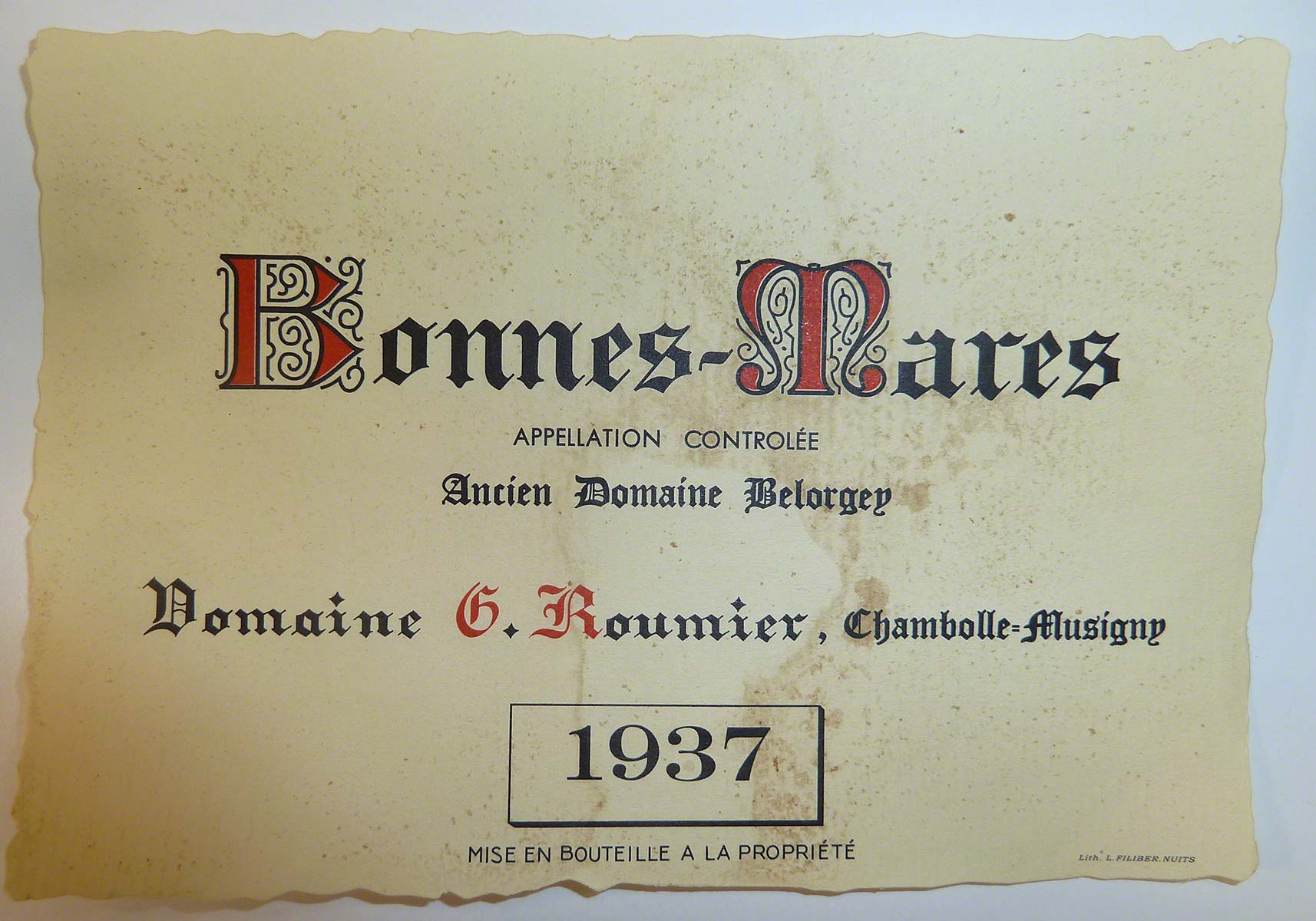 Jason Hernandez asked if Roumier was familiar with the Domaine Belorgey.  Roumier confirmed that he was, but that it no longer exists, as his grandfather purchased their section of the vineyard in 1952.

Roumier confirmed that Domaine Roumier keeps a stock of old wines, but very few old labels, because they were often used or destroyed by time – they have just a few samples.  He has tasted some of the older wines, the oldest of which being 1926.  In the cellar there are no Bonnes-Mares wines from 1924 or 1925, very few from 1926 – perhaps four bottles.  Altogether from 1926 to 1959 there are perhaps 80 bottles.  Hernandez asked if he followed where the wines were bought and sold in the marketplace.  Roumier replied that he does, but he doesn’t track every bottle. 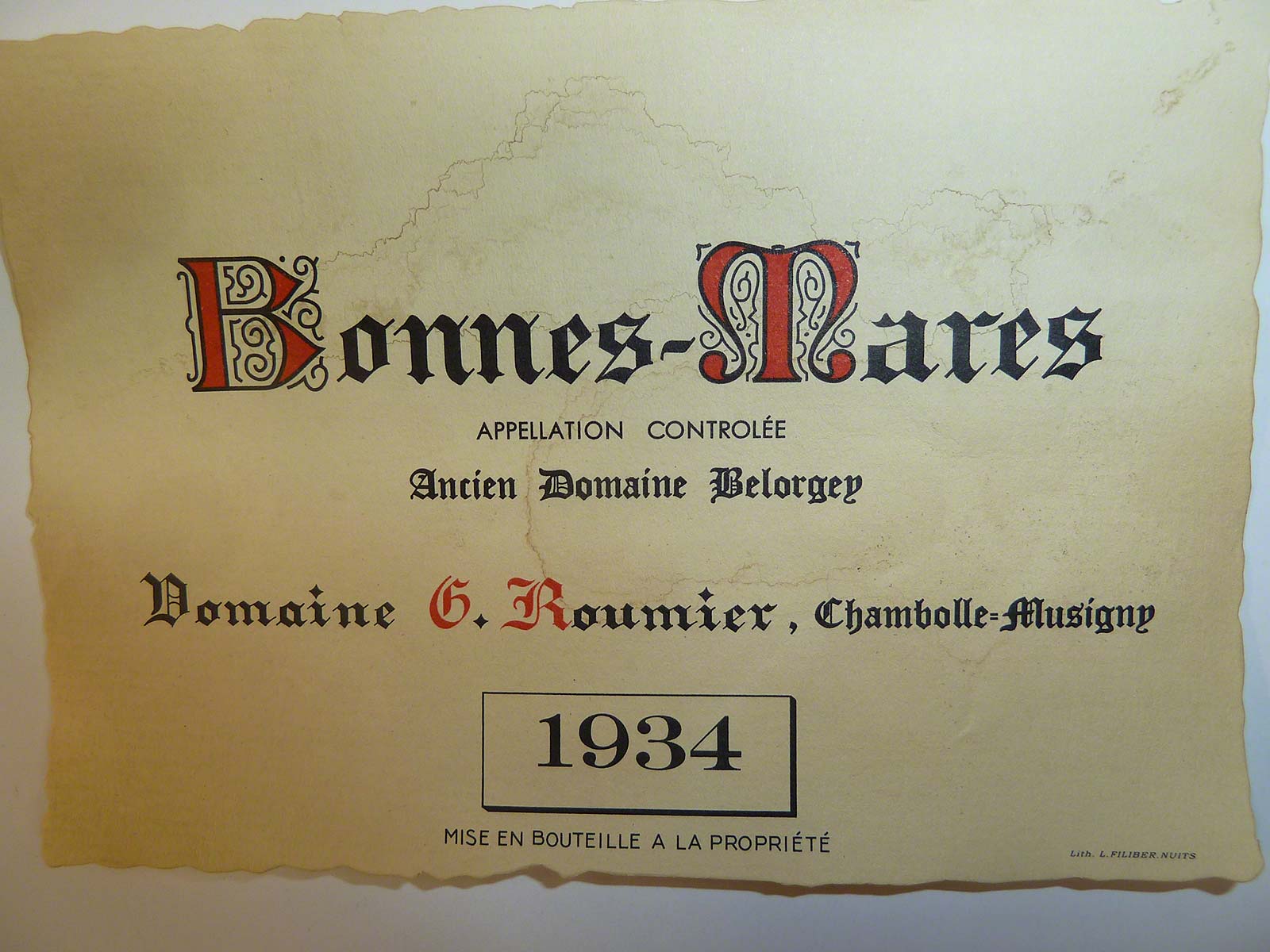 Hernandez then showed Roumier some exhibits of labels.  Roumier replied that he had never seen such labels at the estate.  The cut was not as the original labels would have been nor the colour, and the word Domaine only appears after 1961.  It is not possible to have a reference to Domaine Belorgey before 1952, because that was when it was purchased.

M Roumier also noted that it was impossible to have Roumier anything before 1924, which was when the Domaine was started. 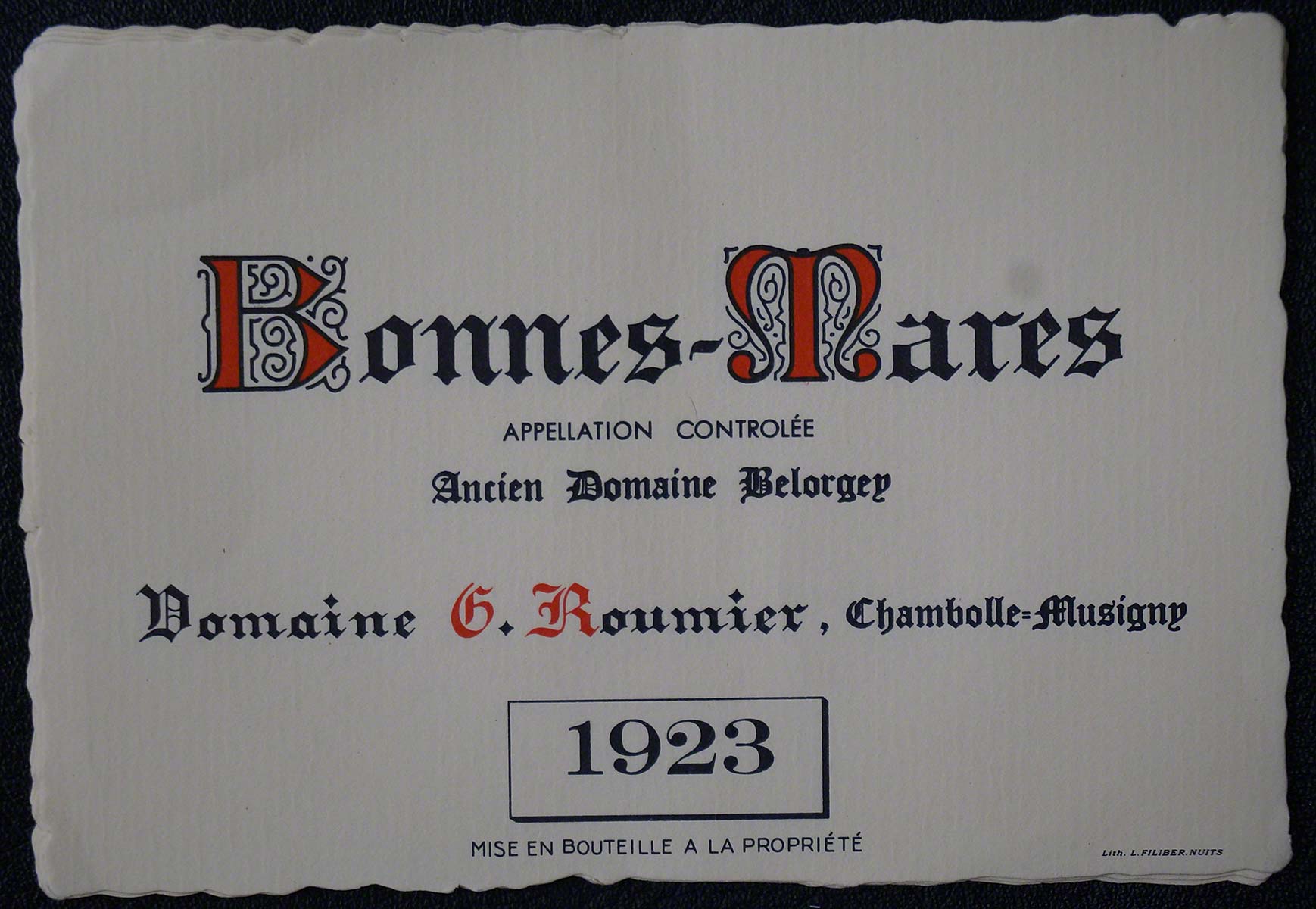 Roumier also confirmed that to apply the labels, they would need to apply glue; the labels were not self-adhesive.

Roumier then stepped down to look at some bottles, starting with one claiming to be a 1923 Domaine Roumier Bonne-Mares, “Ancien Domaine Belorgey”.  He repeated all the reasons this bottle could not exist.

The court broke for lunch, and afterwards, at the side bar, Counsel and Judge Berman confessed to one another that they had each ridden up in an elevator or stood in a line with and said hello to jurors at some point in the lunch break.  Judge Berman remarked that jurors were everywhere, and Verdiramo agreed that they always seem to be. 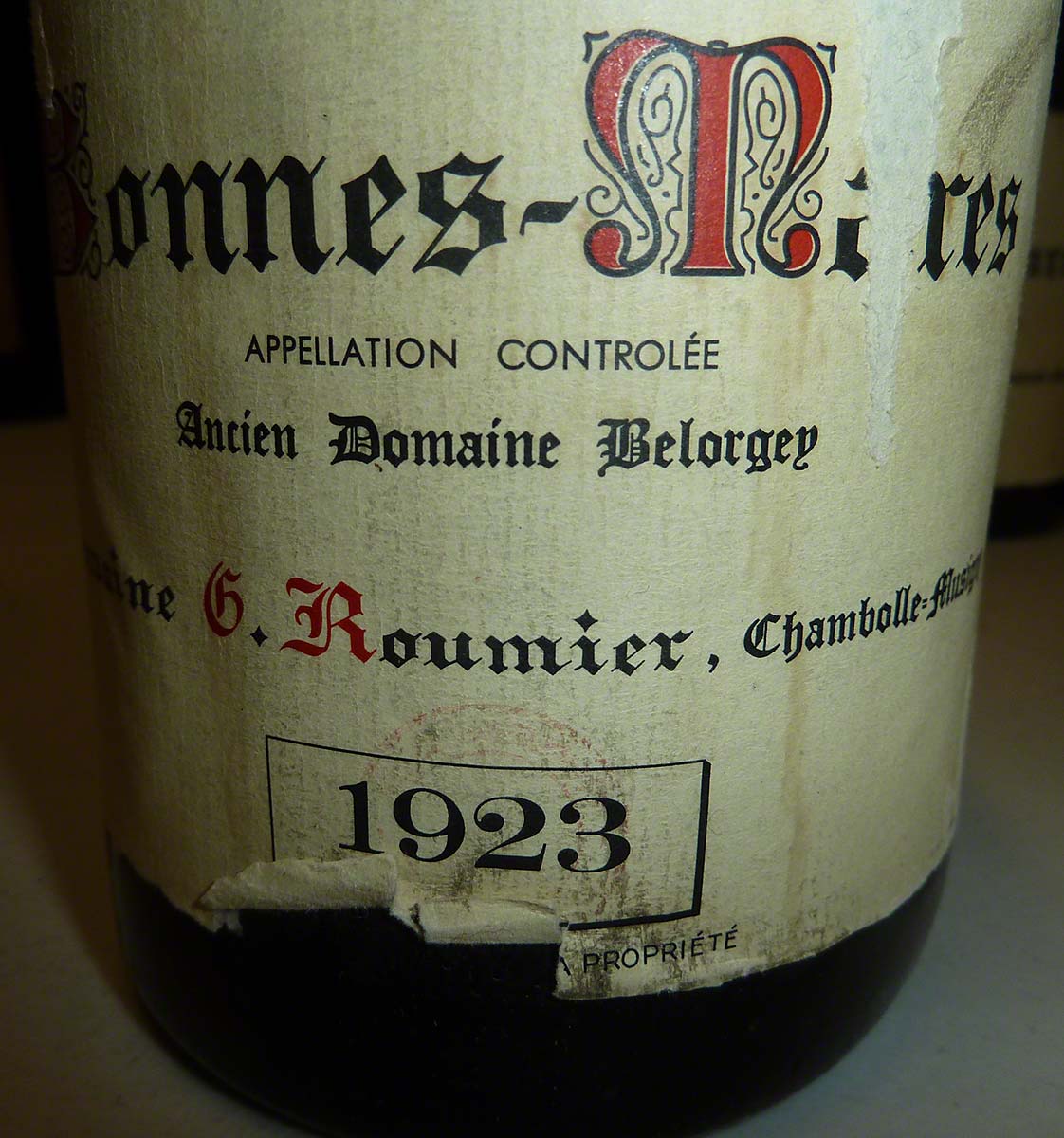 On resuming his testimony, Christophe Roumier confirmed that he knows Don Stott, and confirmed that Exhibit 40-2 was a programme for a tasting and dinner organised by Don Stott in his home in January 2007.  He confirmed that there were older (supposedly) Roumier wines in that tasting, including a 1923 Bonnes-Mares.

Roumier confirmed that for him, there was no question that this could be authentic, given that the Domaine did not start until 1924, and the Belorgey plot was not acquired until 1952. 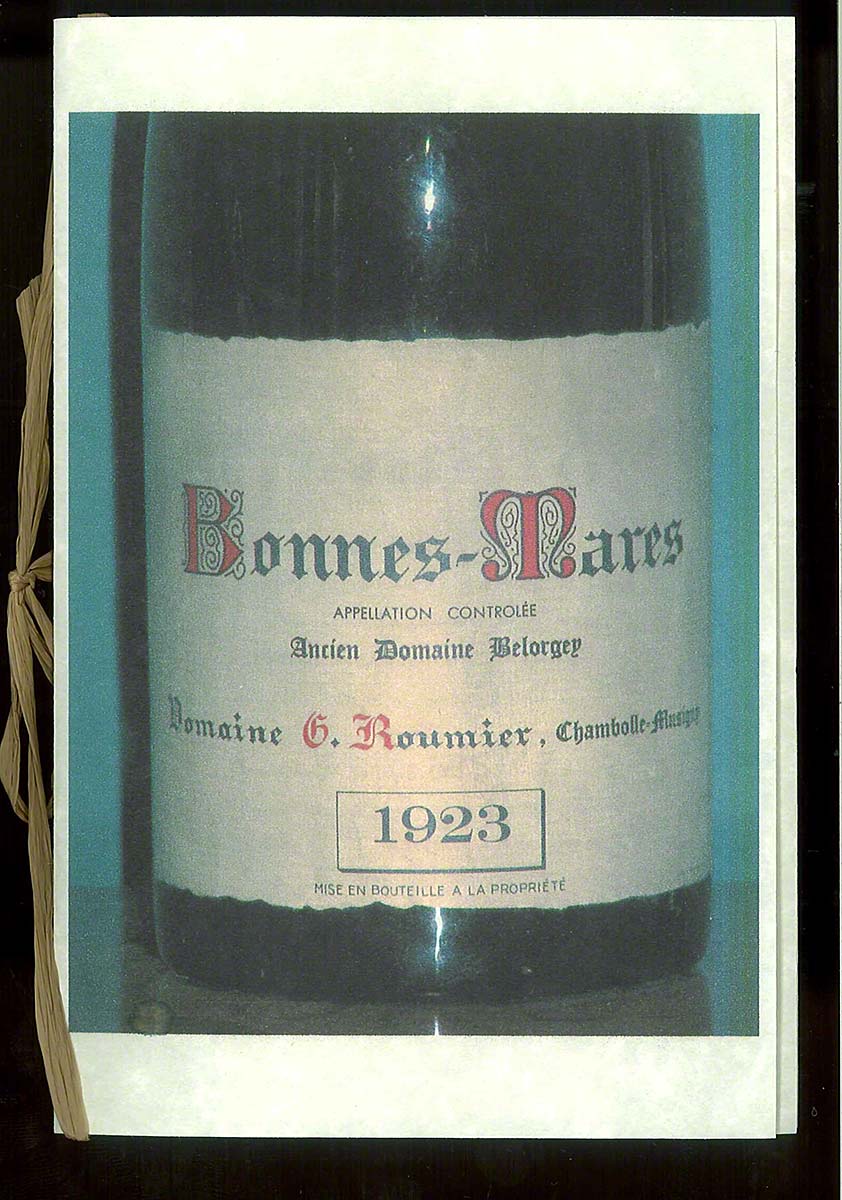 Jerome Mooney began the cross examination by asking if Christophe Roumier took tasting notes at the Don Stott dinner, and what these notes are.  Roumier replied that these are personal notes that he takes for himself, to try to remember the wine after a period of time where he could have forgotten them – descriptions of wine, colour, flavour, type of tannins, texture of the wine.  A general description of the wine.

Mooney noted that Roumier had testified already that the 1923 Bonnes Mares could not exist, but that at the time of the Don Stott dinner, he had not been so sure.  Roumier said that tasting a wine is always a question of feeling, and one can mistake change and bottle variation.  But he wrote down at the time that the bottle was not authentic – it had a tannic structure that was not Burgundian, with a big mouthfeel, a sense of alcohol and a richness that is not typical of Burgundian wines.  He did say that he thought the look of the bottle was old and looked authentic, but it could not be as it was not possible to have that vintage.  On Mooney saying is that essentially he was fooled, at least at first, even though it is his Domaine, Roumier replied that he was offered a wine to taste, he tasted it, and he wrote that it was not authentic.  Mooney pressed that Roumier did not immediately recognise the bottle as being a fake.  M Roumier contradicted him, saying that he said to the people there that this was not possible, because the winery did not start until 1924.  He accepted that someone might have been fooled by it, but that if you knew the history of the domaine, it was not possible. 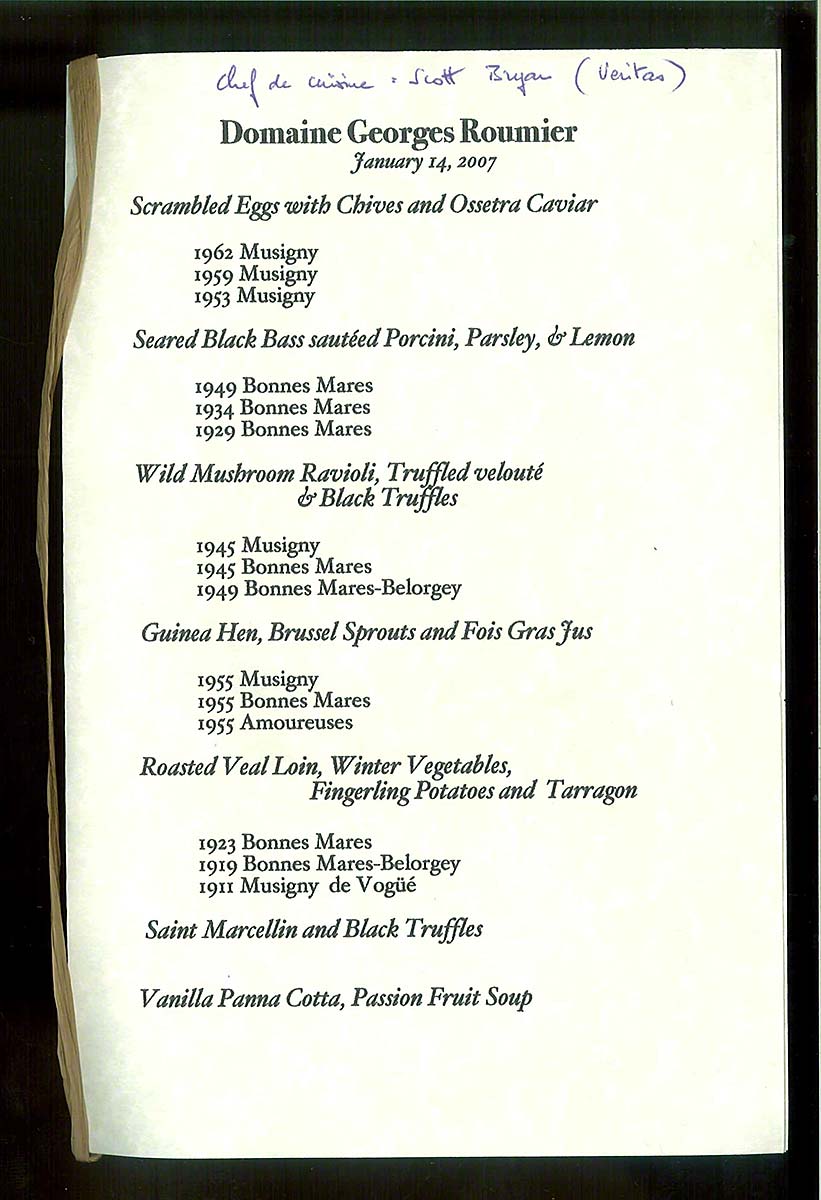 Mooney then asked how many bottles they drank that night, 13 or 14, and the tasting notes by the end would be pretty blurry by the end.  Roumier explained the difference between tasting and drinking the wine, and how when tasting people generally spit.

Mooney then returned to the programme for the tasting, saying that the 19 wines tasted were all Roumier wines.  Christophe Roumier replied they were labelled as such.  He had identified two in his tasting notes as being suspect.

They then looked at a tasting note that Kurniawan had written.  Roumier stressed that, except for professionals who might publish their notes, tasting notes were personal opinions and experiences.  Sometimes they would be discussed with friends, in the way one might discuss impressions of a painting, but they were intensely personal.

Roumier confirmed he had met Kurniawan, after the Don Stott dinner, at an event in San Francisco in 2008.  The defence produced exhibit E-1, an empty bottle of 1934 Bonne Mares, signed by Christophe Roumier, at Kurniawan’s request.

Roumier then specified that the Roumier vineyard became Roumier when his grandfather married his grandmother in 1924 – it was her dowry.  Before that, it was in her family name, which was Quanquin.  His grandfather died in 1965.  Roumier’s father started to work with his grandfather in about 1954, and retired in 1990, and Christophe Roumier began working with his father in 1981. 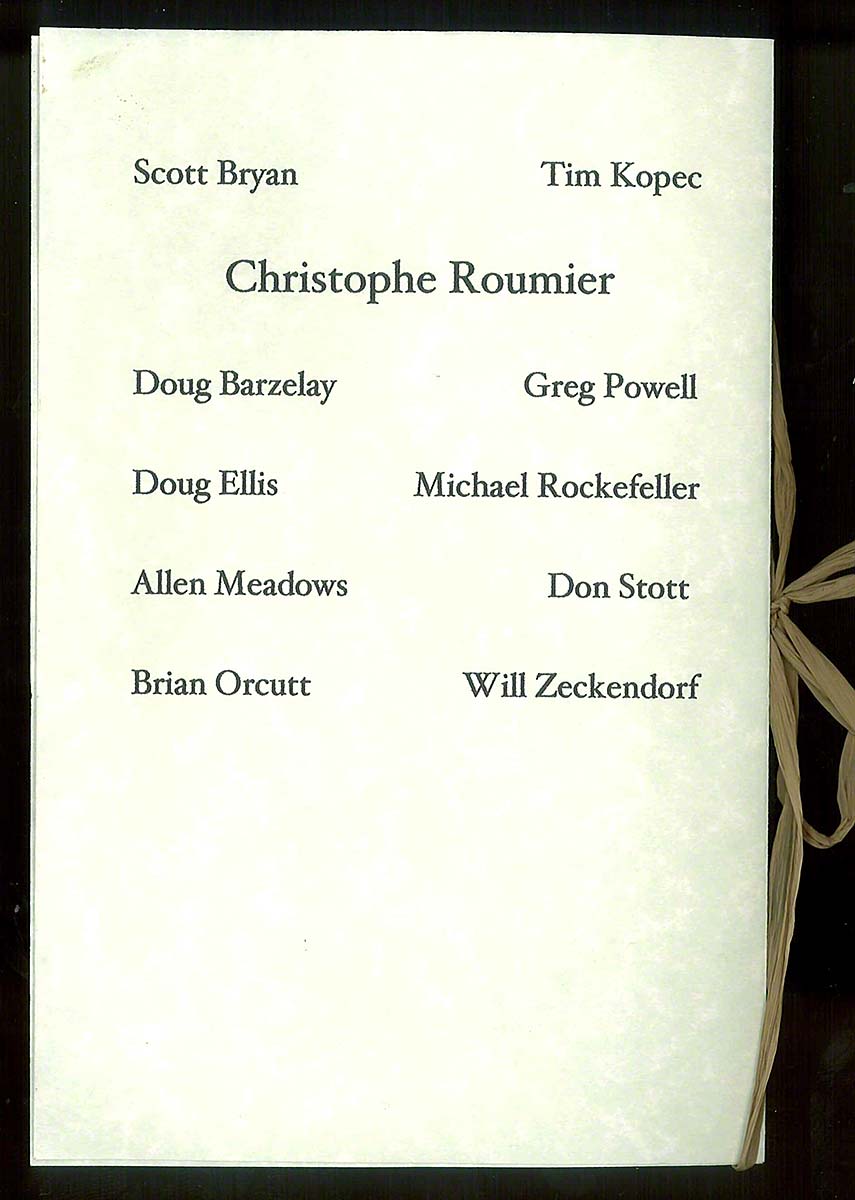 Mooney noted that Georges Roumier had run the domaine through the war years, which Christophe Roumier added were very difficult – not just because of the war but because prices were very low.  Burgundy was occupied from 1939 to 1945, and Roumier confirmed he had been told that the Nazis put someone in charge of the wines from Burgundy.  Mooney noted that some people hid wine during this period, which Roumier confirmed.  However, there were no Germans at Domaine Roumier, and the Germans did not seize their wines.  Mooney suggested that at that time there were a lot of strange things happening to how things were bottled, and that in order to meet demand of the Germans, it was common for vineyards to put together phony bottles. Roumier replied that he did not know about this.

Roumier confirmed that any bottles kept at the estate are labelled when they are shipped- so that if a bottle of 1945 Bonnes Mares was released in 1985, it would be labelled in 1985.  As a result, one may see different labels on bottles of the same wine.  Similarly, wine was sold in barrels, and labelled by others, which could explain discrepancies in the way labels looked.